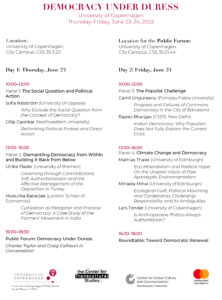 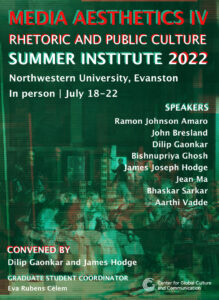 The deadline for applications is Monday, June 20, 2022

This year’s theme is Media Aesthetics.
What does it mean to study and to theorize media today? What does it mean to study aesthetic texts and experience in a global media ecology no longer dominated by the long-standing paradigmatic forms of the disciplines of art history, literary studies, and cinema studies (painting, the novel, film) but rather by a panoply of multimedia forms (video games, digital art, social media, sound media)? What are the key sites of inquiry and the best theoretical resources for thinking through the saturation of contemporary life, politics and culture by media technologies? The challenges facing critical investigations into these questions are legion and daunting: from climate change and intense social inequities to divisive politics and more. Keeping these larger contexts and issues in mind, the summer institute will host a week of lecture and discussion on the topic of “media aesthetics.” In choosing “media aesthetics,” we affirm that big questions may be addressed at the levels of individual and collective experience and, moreover, as questions of mediation specific to a vast and uneven field of aesthetic forms circulating in global networks. Further, this seminar affirms the role of artworks and aesthetic experience more broadly as key sites of encounter. For the past several decades if not since at least the 1960s aesthetic production in its institutional manifestations has become more varied, less medium specific, and perhaps more fruitfully approached in a comparative manner. One key development here concerns the increasing and uneven ways in which the boundaries between more institutionally-sanctioned forms of aesthetic production and more ordinary vernaculars of experience have come to be understood as permeable and newly articulated and entangled. Taking aesthetics in its Greek sense of aisthesis (perception or feeling), we affirm the significance of methodologies and approaches such as affect theory, queer theory, phenomenology, Black studies, and psychoanalysis over and above approaches valorizing technology as such. Taking note of many local interventions in theoretical approaches to media studies, however, the summer institute asks what affinities and commonalities these often-disconnected discourses share.

The institute is sponsored by the Center for Global Culture and Communication (CGCC), an interdisciplinary initiative of Northwestern University’s School of Communication. The CGCC will subsidize transportation (up to $250), lodging (double-occupancy), and some meals (breakfast and lunch every day and two group dinners) for admitted students. Applicants should send a brief letter of nomination from their academic advisor, along with a one-page statement explaining their interest in participating in this year’s institute, to the summer institute coordinator Eva Rubens Celem (evarubenscelem2026@u.northwestern.edu) We will adopt a policy of rolling admissions. Priority will therefore be granted to strong applications that are submitted in a timely fashion, preferably by June 20, 2022. All inquiries should be directed to Eva Rubens Célem. 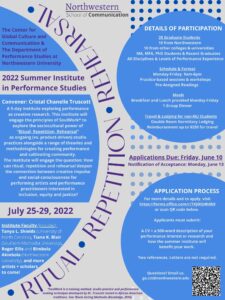 The Center for Global Culture and Communication and the Department of Performance Studies at Northwestern University invite applications from graduate students (MA, MFA, and/or PhD-track) and recent graduates for a 5-day institute exploring performance as creative research. This institute will engage the principles of SoulWork* to explore the sociocultural power of “Ritual, Repetition, and Rehearsal” as ongoing (vs. product-driven) studio practices alongside a range theories and methodologies for creating performance and cultivating community. The Institute will engage the question: How can ritual, repetition and rehearsal deepen the connection between creative impulse and social-consciousness for performing artists** and performance practitioners*** interested in inclusion, equity and justice? Each day participants will work with distinguished artist-scholars and culture workers in a practice-based workshop format.

and/or to email (ga.cct@northwestern.edu) with questions.

Conference on Rhetoric and Politics of Protest and Direct Action, May 19-20, 2022 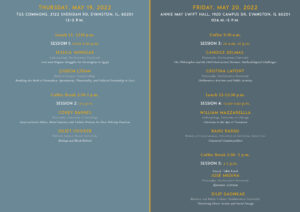 “Rhetoric and Politics of Protest and Direct Action”

Conference on Rhetoric and Politics of Protest and Direct Action, May 19-20, 2022 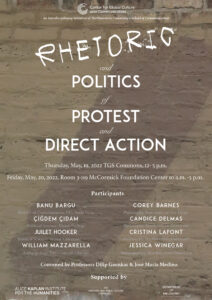 “Rhetoric and Politics of Protest and Direct Action”