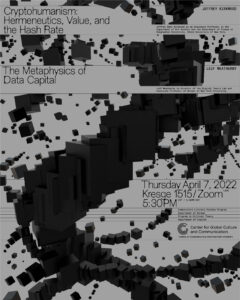 Surplus Data
Jeffrey Kirkwood (Binghamton University, State University of New York)
Leif Weatherby (New York University)
Thursday April 7, 2022
5:30pm Central Time
Kresge 1515
Remote participants may register for the hybrid lecture on Zoom
In the time of always-on computing, issues of data extraction and collection, surveillance, and privacy seem to navigate most of our discussions and concerns regarding certain forms of digital technologies. We have commonly come to refer to this as the era of Big Data. But, most recently, in a special issue of the journal Critical Inquiry, the four editors begin by stating that “It is no longer enough to say that data is big. Data is now in a state of surplus.” This event then, comprised of two talks, places us in conversation with Jeffrey West Kirkwood and Leif Weatherby, two prominent scholars of media theory and digital technologies—as well as being two of the four editors of the mentioned journal issue—to address and build on the issue of ‘surplus data’ and the already-ongoing and yet-to-be-lived consequences of this data capital. Join us as we hear from them and their respective talks titled: “Cryptohumanism: Hermeneutics, Value, and the Hash Rate,” and “The Metaphysics of Data Capital.”
This event is sponsored by The Center for Global Culture and Communication, Northwestern University, and co-sponsored by the Comparative Literary Studies Program, the Department of German, the Department of English, and the Program in Critical Theory.
Attendees interested in joining a Surplus Data reading group that will meet before the event should email José Chavez (josechavez2025@u.northwestern.edu)  and Kang Kang (kangkang2026@u.northwestern.edu).